It is understandable that Performance Marketing, where actions are paid for by their results (CPC, CPA, CPL and CPS), attracts advertisers. From their (our) point of view, the thing is easy: we define goals and the agency offers such a level of costs at which it is able to achieve them.
While calculating the costs, agencies most often evaluate their own risk; they try to predict how effective the campaign will be. A few years ago, however, some agencies started to shift the risk to publishers. Put simply, in their activities, they rely on affiliate programmes.

The idea is as old as trade. The affiliate (in the case of the Internet it is “the publisher”, i.e. the owner or administrator of a website) promotes the advertiser’s offer in return for compensation which the affiliate receives when users redirected to the advertiser’s website perform specific actions. In the majority of cases this compensation is a simple commission on sales.
Many businesses decide to build and run an affiliate programme on their own. And while it is not at all a great challenge to deal with the basics of an affiliate program (rules and regulations, software to track redirections and calculate compensation), it is a feat to administer and stimulate it.

An alternative to affiliate programs run by businesses on their own are affiliate networks. In return for small compensation (most often at 20-30% of the commission paid to affiliates), they manage the technical part of the program (they count actions and often publish adverts) and contact the publishers (they find new affiliates and calculate compensation).

World leaders in this business are Commission Junction, ShareASale, LinkShare and ClickBank, with ClickBank acting in a kind of unusual way as it wants to deal with the payments in the website it advertises.
Reputable networks have existed for years and are really large (up to several hundred thousand publishers). However, they charge high initial fees (up to $3,000) and reserve the right to refuse to cooperate. Yes, they not only choose publishers but also advertisers. Despite that it really pays to cooperate with them. The so called “super affiliates”, i.e. the publishers generating huge turnover (which is greater than that generated by thousands of other publishers), cooperate with those giants.

It is also good to mention the affiliate offer of the international internet marketing giants, such as Google, TradeDoubler, OMG and Zanox and of the local networks and agencies. What you have to bear in mind here, however, is that the activities of local agencies and affiliate networks are much smaller scale. So that the business can be profitable not only for advertisers but also for publishers and for the networks themselves, the networks make every effort to combine the CPS model (which for obvious reasons is the most interesting to advertisers) with the CPC model and call this a “preceding branding campaign” or a “hybrid model”. Only some networks agree to a pure CPS model.
Another disadvantage of the local players is their managing of processes: not everything is automated and very often they require you to comply with much more formalities (agreements, scans of documents etc.).

A few words about how the thing works. In the largest networks, everything is automated, from registration, through program configuration, adding publishers and tracking actions to calculating compensation.
After the registration, the advertiser (having paid the fee and having been accepted by the network) configures the affiliate program by defining the compensation model (CPC, CPL or CPS) and the amount of compensation/commission. Then it uploads banners to the system and defines target links for them. The advertiser also decides whether it wants to manually accept publishers interested in the program or whether they should be accepted automatically.
The next step is the integration of the advertiser’s website (landing page) with the network’s system. That, however, I will explain in a moment.
It is good to promote the created program among the publishers of a given network and as far as this is concerned, the networks offer various support opportunities.
The publishers interested in joining the program step forward and after being accepted, they choose banners (creations, sizes and sometimes only text links). They receive an individual code which they put on their website. The advertiser’s banners are displayed at their sites from now on.
When a user clicks the banner a cookie file is saved on its disk. The cookie is then used to identify the user as redirected by that specific affiliate.
After the user performs an action specified by the program (most often the action is a purchase, but very often it is also registration or the ordering of a subscription), the advertiser’s website transfers detailed information on the action (e.g. on the transaction amount) to the network’s system. That is the integration which I mentioned above. It is most often done in this way that a demand is triggered to download a graphic element together with respective parameters from the affiliate system.
At this moment, the affiliate system checks whether the network’s cookie file is there on the disk of the user who has just performed an action. If yes, the systems calculates commission for the affiliate to which that user was assigned.
It is worth mentioning here that cookie files have a defined lifetime (which is most often 90 days), after which they expire. That means that if a user clicks the network’s banner but performs an action (e.g. makes a purchase) after a month, then still the commission will be calculated for the affiliate. 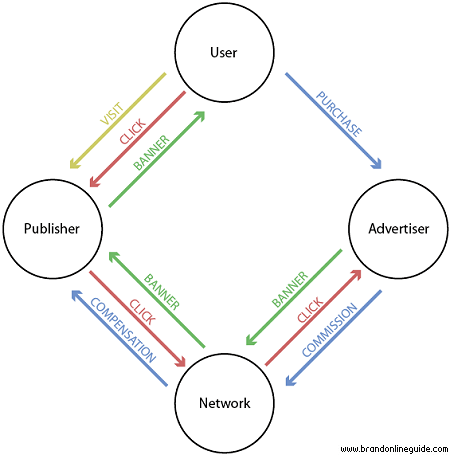 Regardless of whether you decide to have your own system for the affiliate program or let a network or an agency run the program for you, I have one key recommendation. Treat this undertaking seriously and as an investment.
It cannot be one of many marketing activities which you just “try out” and which, when put to live, works well or fails. Success in affiliate marketing depends not only on how attractive the product is but above all on how attractive the program itself is. And for the attractiveness to be achieved and maintained, you have to develop the program on a regular basis, actively win affiliates (publishers), care for them and stimulate their activity.
And so we arrive at a job position with responsibility for affiliate marketing or affiliate programs. Specialists or even managers dedicated to this business area more and more often appear in marketing departments of companies. This is the right track.

Hi,
Good post about affiliate marketing and affiliate program you explain very nicely.
Keep it up…

At the end of 2011, Facebook introduced Timeline in private profiles. This is a new layout of a user page...